Since the launch of Ethereum in 2017, there have been thousands of Initial Coin Offerings (ICOs) in the cryptocurrency space. The cryptocurrency industry has not stopped growing throughout this time, launching more and more tokens into the market, always in the hope that they will become a success capable of competing with Bitcoin or Ethereum.

Just like when creating a company or a startup, raising enough money to finance such a project is not easy. For this reason, many companies resort to seeking alternative sources of funding, such as ICOs, which aim to find investors interested in the project.

If you have thought of launching your own token through an ICO, read this article to learn how to do it successfully.

What Is an ICO?

An Initial Coin Offering (ICO) is a mechanism similar to an Initial Public Offering (IPO)—common in traditional finance—only applied to cryptocurrencies.

IPOs are generally the process of offering shares of a private company to the public through a regulated sale so that the company can raise capital from public investors.

Thus, companies planning to create tokens launch ICOs. If investors sense that the project or product has potential, they invest in this initial offering, and receive their tokens once the sale is over. The value of these tokens usually varies, although one of their characteristics is that it always offers an advantageous price at this sale stage.

ICOs were especially popular between 2017 and 2018 when hundreds of projects chose this method to raise funds to finance the launch of their tokens. 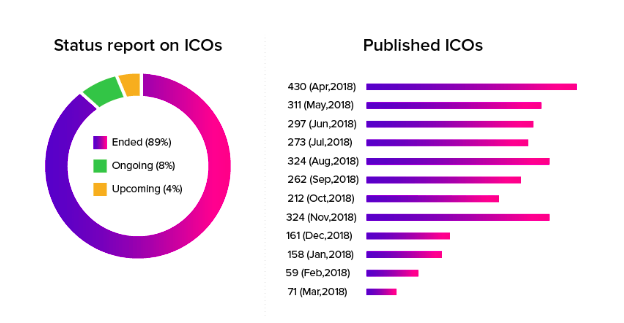 For example, when we created our utility token, B2M, we launched it through Bit2Me Launchpad, our ICO launchpad. The ICO had three phases:

In most countries around the world, there are no specific regulations regarding ICOs.

Some countries, such as France, are considering regulating them, while others, such as China or South Korea, have banned ICOs altogether. The United States has decided to apply the same law to ICOs as to IPOs, and Japan has classified them as “payment services”, so they must comply with payment regulations.

Are ICOs Legal in Spain?

In Spain, it is key to differentiate between two categories of tokens:

Now that we have differentiated the two types of tokens that can be found in an ICO, let’s see what happens with Spanish regulations.

Security token ICOs are regulated, as these tokens are treated as financial instruments under Article 2 of the consolidated text of the Spanish Securities Market Act, so Directive 2014/65/EU -MiFID II, Regulation (EU) No 600/2014-MIFIR and the provisions of Spanish Royal Legislative Decree 4/2015 of October 23, apply. Therefore, CNMV authorization and supervision are required for security token ICOs, also called Security Token Offering (STO). For more information on CNMV considerations on Utility Tokens, please refer to the following links

Utility Tokens, on the other hand, do not require prior authorization by the CNMV or supervision by any Investment Service Company (where issuance size is less than €8 million), as they are considered Public Offerings, which are typified in the Spanish Civil Code.

Does this mean that Utility Token ICOs are not regulated? No. On the contrary, utility token ICOs still have to take into account consumer, electronic contracting, data protection, and money laundering prevention regulations, as well as regulations related to advertising.

The draft Regulation of the European Parliament and of the Council on Markets in Crypto-Assets (MiCA) also explain utility tokens imply a lower risk for users, so they are not subject to a prior authorization regime but to a supervisory notification regime.

Despite the differences we have explained, you may have doubts when determining whether an ICO falls within the scope of CNMV supervision or not, especially when the issuer makes no direct reference to the revaluation of the token, and this is produced by the natural growth of the market or service.

To help you decide, we share with you this table:

How Does an ICO Work?

First, you must analyze whether you really need to create a token. If you want your ICO to succeed, you must offer a solution to an existing problem, but not just any solution; today there are thousands of tokens, so you must offer real value beyond speculation.

To understand whether you really need to create a token, you must conduct an in-depth study and understand the market, as well as the needs of your target user and, most importantly, whether they will be willing to invest. Fortunately, some consulting services, such as Bit2Me Consulting, can help you conduct this preliminary study.

Let’s see, step by step, how to approach an ICO as a company:

To create an ICO to launch their own token, companies must also:

The Importance of Whitepapers

A whitepaper is an essential document for any ICO, as it describes the project, including even the smallest details. An ideal whitepaper should cover everything: market analysis, project vision, development strategy, architecture, goals, token distribution information, tokenomics, legal issues, resources, team description, etc.

Not all users participating in the ICO will read the entire document. However, blockchain experts and crypto enthusiasts will, and these are the profiles you should look out for, as they are opinion leaders in the crypto sector.

Differences Between an ICO, IDO, or IEO

Although these three concepts have points in common, they are actually different, and it is worth knowing why:

Can Anyone Launch an ICO?

As usual in the crypto sector, there is hardly any regulation on ICOs, so anyone with the right technology can do it. However, it is essential to always do it on a platform with guarantees, proven experience, the best security mechanisms, and operational infrastructure (technological and marketing), such as Bit2Me Launchpad.

One of the main reasons for choosing a company with proven experience in the sector is to avoid problems and scams. Being relatively easy to create, some ICOs are set up as scams.

That was precisely the reason for the bursting of the ICO bubble in 2018 and is also why investors should be very cautious when selecting a project to invest in. And why you should study each project in-depth and be sure at all times that you are fully convinced.