Bit2Me at the European Commission

In order to clarify this, Bit2Me has participated within another relevant Bitcoin startup as Circle, Ethereum or the also spanish, Coinffeine, in the Blockchain and Digital Currencies Workshop, based in the European Commission, Brussels.

Bit2Me explained to a room full of regulation experts from the European Commission, Banking and FinTech, as representatives from mobile banking businesses and another Bitcoin startups, the role that not only Bitcoin, but the Blockchain will have in the remittances market and unbanked countries, as it´s potential in comparison to the traditional bank, analysis of the current adoption and barriers for bringing Bitcoin to the masses, explaining how to demolish them, with the experience gained with Bit2Me in using existing infraestructures to implement our services

The event started with an introduction made by Alex Puig, where in a very entertaining way, he explained the legal nature of Bitcoin in different areas, even wondering why people fears Bitcoin and electronic money, when our actual currencies are also electronic money, non backed with any asset.

As we said in our presentation as well, Alex developed a concept that is key for us, in Bit2Me, and it´s that Bitcoin is the internet of money, and it will radically change the way that individuals interact daily, a change that will be progressive, but that given a point, we won´t understand life without Bitcoin after a decade, as we don´t understand life without internet when we want to send o receive information actually.

In our presentation we covered different topics, between which we can highlight the 42.000 million of savings in fees, yearly, that the Blockchain´s adoption in remittances flows would mean, instead of the traditional methods, as the drastic slowdown of the Bitcoin´s merchant adoption rate, with less tan 1.800 new merchants accepting Bitcoin in Q1 2015.

We also highlighted the small size of the “rebittances”(Bitcoin Remittances) market, accounting for just $12 milliion, vs the +$512 million of the generic remittances market, as the relevance of using Bitcoin´s technology, not making users to adapt to it, but to adapt this technology to the way people use actual services, this means to exclude Bitcoin from the user experience. You don´t need to understand the HTTP protocol to browse a website, neither you should understand Bitcoin to perform a transaction.

In the event, we talked as well, about the need from the regulators to establish a clear and stable regulation, in order to allow not only businesses to develop, but also to attract investment and minimize strategy mistakes, something that actual uncertainity limits, with recent examples as the exemption of VAT for Bitcoin transactions in Spain, something that spanish Bitcoin business used to asume, given the previous information, and that can have reppercussions in our competitiveness.

After the great talks, which have shown the good work, talent and big human capital involved in Bitcoin startups, we must highlight the surprise of the attendees, when hearing about the immediacy and simplicity of our service, which allows to send funds from all around the globe to Spain instantly , cheap, and secure, as hearing also about the benevolence of spanish Banks with Bitcoin, way more permisive than another lead in innovation countries as USA.

The event finished with a discussion panel where the different would face the questions raised by a very informed public, focused primarily on the legal side, and choice between whether regulation may benefit more companies or users of Bitcoin, and scalability. 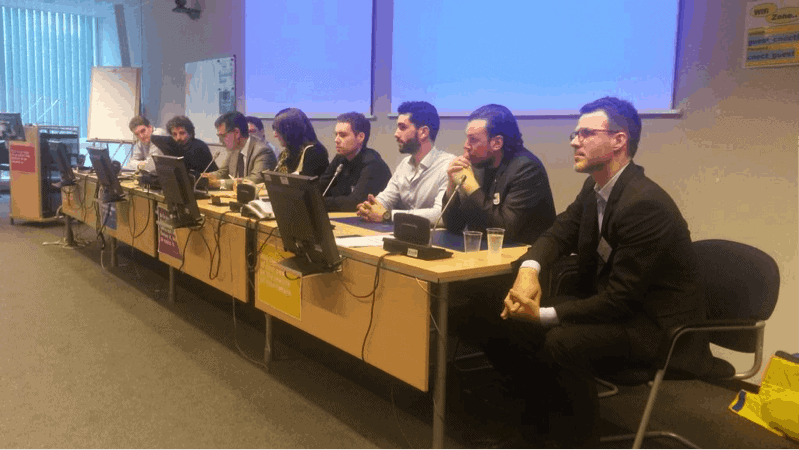 With the great welcome that we have seen, we are confident that this event has been helpful to shorten distances between companies and regulators that could allow major benefits to Bitcoin users, guaranteeing the maximum freedom while accomplishing with institutions in areas such as laws anti-money laundering.